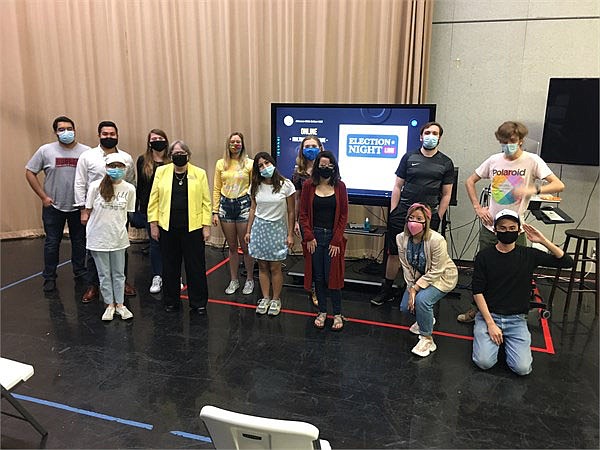 John Brown University communication students gathered for a watch party to hear the results of the Arkansas College Media Association Awards. ACMA awarded JBU first place for their Election Night coverage, which involved more than 30 students in a variety of majors. (Courtesy photo)

John Brown University communication students racked up a number of awards from the Arkansas College Media Association, Arkansas Press Women and the Evangelical Press Association as the school year came to a close.

The Evangelical Press Association awarded the Threefold Advocate an Award of Excellence for the newspaper's digital publication, an Award of Merit for the print publication and fifth place for Student Writer of the Year to María Aguilar, managing editor, for her profile "Mayra's Journey to Freedom Beyond Borders."

Arkansas Press Women, an organization for student and professional communicators, honored five JBU students and a faculty member. First-place winners in the APW contest are eligible to advance their entries to compete at the national level if they are members of the National Federation of Press Women.

Senior Catherine Nolte -- Third place in Professional Division for Writing, Specialty Articles, Social Issues for "Part of the Kingdom: Documentary sheds light on the experiences of LGTQIA students at Christian universities" and honorable mention in Professional Division for In-depth Reporting for "French and Metaxas debate and protest; online harassment" (María Aguilar was a co-entrant on the latter.)

Debbie Miller, assistant professor of communication and faculty adviser for The Threefold Advocate, received two awards: first place in Collegiate/Education Division Faculty Adviser of Student Publication, Station, or Site and second place in Professional Division for Specialty Articles -- Personal Essay for "Famous Women You Not Have Heard Of."

The Georgia Institute of Technology presented degrees to approximately 4,435 undergraduate and graduate students during the Institute's 260th Commencement exercises May 7-8 at Bobby Dodd Stadium. Among the graduates were:

The Georgia Institute of Technology, or Georgia Tech, is a top 10 public research university located in Atlanta.

The University of the Cumberlands has announced the students named to the Dean's List for the spring 2021 semester.

To be eligible for the Dean's List, students must be enrolled in at least 12 credit hours, maintain a minimum cumulative grade point average of 3.50, and be in good academic standing.

Among those honored were Lisa Lacey from Fort Smith and Rachel Reyngoudt from Huntsville.

University of the Cumberlands is one of the largest private universities in Kentucky, located in Williamsburg.

Southern Arkansas University has announced that 514 students earned a 3.5 GPA or higher for the spring 2021 semester and have been named to the Dean's List. They include:

With more than 80 degrees in four distinct colleges and the School of Graduate Studies, SAU is located in Magnolia.

Southern Arkansas University has announced that 394 students earned a 4.0 GPA for the spring 2021 semester and have been named to the President's List. Among them are:

With more than 80 degrees in four distinct colleges and the School of Graduate Studies, SAU is located in Magnolia.

U of Sioux Falls

Riley Robbe of Bentonville was named to the University of Sioux Falls' spring 2021 Dean's List. Robbe is majoring in biology.

Robbe was among more than 600 students named to the Dean's List. To qualify, students must earn a GPA of 3.5 or greater on a 4.0 scale.

Founded over 137 years ago, the University of Sioux Falls is a Christian liberal arts university serving approximately 1,500 students in Sioux Falls, S.D.

Students named to the President's List earned at least a 4.0 grade point average on a 4.0 scale, completed at least 12 hours of standard graded credit, achieved no grade below an A and received no failing grades in enrolled, credit/no credit or pass/fail courses.

The following students have been named to the President's List:

Union University in Jackson, Tenn., has named 377 students to the Dean's List for the spring 2021 semester. Among them was Grace Bowerman of Springdale.

The Dean's List includes full-time students who achieve a 3.5 grade point average on a 4.0 scale.

Founded in 1823, Union University is affiliated with the Tennessee Baptist Convention.

Nathan James from Bentonville was named to the spring 2021 Dean's List for exemplary academic performance at Westminster College in Fulton, Mo.

James is a senior at Westminster.

To be included on the Dean's List, a student must have a 3.60 semester grade point average with at least 12 hours completed that semester.