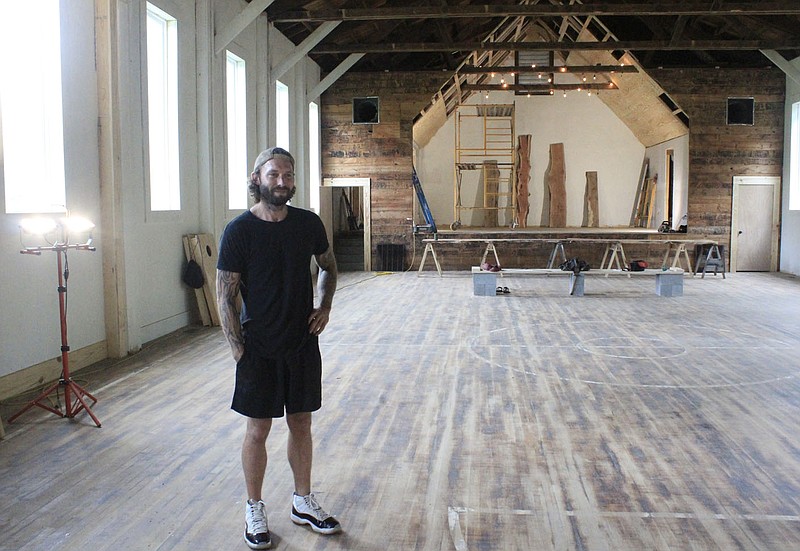 Tom Black of Natural State Renovations is seen inside the gymnasium of the historic schoolhouse on Old School Way in Rudy. Once renovated, the gym will hold wedding receptions and concerts as part of the Old School Venue.

RUDY -- A venue that once held the sounds of recess and physical education class will soon be filled with live music and wedding bells.

Tom Black of Natural State Renovations is spending $300,000 to transform the remains of the historic Rudy School at 503 Old School Way into the Old School Venue, which will host weddings and live music. Black hopes the renovation will draw visitors to Rudy and give the community a purposed space while honoring the venue's history.

"I'm not wanting to change anything. I'm wanting to highlight," Black said.

The venue will be constructed from the ruins of the schoolhouse and the gymnasium next to it. The schoolhouse, which burned in the 1960s, was constructed in 1933 as a Works Progress Administration project. The gym was moved from Fort Chaffee to Rudy after World War II.

Black, who helped construct the Bakery District in Fort Smith, said he "fell in love" with the gym.

The project, which is paid for through personal savings and First National Bank, includes new windows, heat and plumbing and the addition of dressing rooms in the gym. Black is also landscaping steps next to a waterfall on the property for wedding photos and the inside of the ruins for ceremonies.

"I'm guessing there's going to be about 75% of the ceremonies being out in that old school and then the reception party being in the gymnasium," Black said. "That way, you can have a stage for the band or a stage for the DJ and then the dance floor, tables, chairs and then a serving area."

Black also plans to renovate a church on the property for housing. It would accommodate the wedding parties, which could travel to Rudy by train from Arkansas & Missouri Railroad depots in Springdale or Van Buren.

While Black expects weddings to be his main source of revenue from the venue, he also wants to host and emphasize live music at Old School because it "brings everybody together." He's already had Rudy band Winn Mountain perform at the venue for a crowd of 40. Other bands have asked if they could shoot photos or music videos there, he said.

Winn Mountain fiddler Larry Walker said the acoustics in the gym were "awesome" when he performed there with his band.

"We put two small little amps on the stage, and we don't have to turn them up very loud, and you can hear them plumb at the back of the building," he said.

"My goal would be where this place would be packed out for music and bring something for Crawford County, because we don't have anything like that here. We go to Fayetteville, or we go to Fort Smith," Black said.

Black looks to hold weddings at the venue starting next spring. He's already received inquiries from companies that want to hold Christmas parties there. He's also going to let the local fire department use the space for a party.

Several customers at The Rudy Store have asked about Old School, Marston said. He anticipates they'll be pleased with the venue, which he said should have been renovated a long time ago.

"When it gets up and running, people are going to start to see Rudy," Marston said.

Max Bryan can be reached at mbryan@nwadg.com. 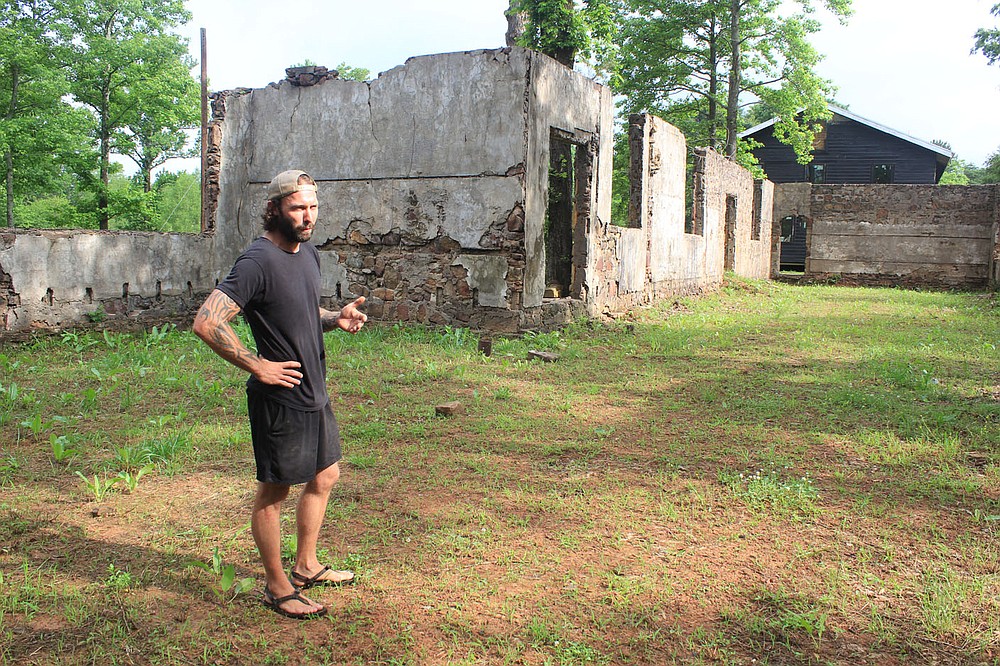 Tom Black of Natural State Renovations shows the ruins of a historic schoolhouse in Rudy he's developing into the Old School Venue on June 9, 2021, on Old School Way. The ruins will function as an outdoor wedding venue.
More News

Rudy is a small community located on Arkansas 282, just northwest of Alma.